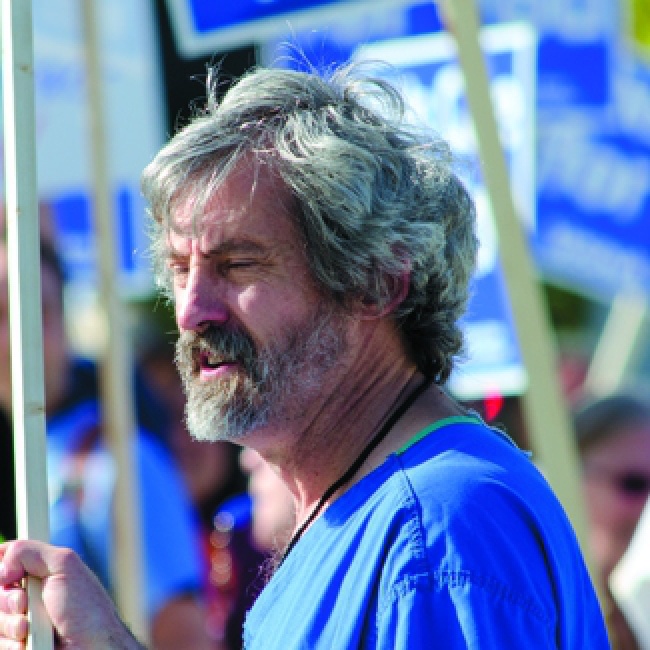 Harry has been on the negotiation team for 20 years. He is known for his ability to keep his team informed and for making the extra effort to communicate with the nurses in his facility. Harry is well respected by both peers and management for his leadership skills and calm demeanor. He is always steady in the face of adversity and acts as a true mentor to new members.

Harry is the first WSNA person to greet newly hired nurses at UWMC and presents the best first impression of the positive influence the union has on everyday life at UWMC. He is helping the next generation learn to advocate for RNs.

Harry gives selflessly of his time and talent to lead his local unit and is always faithful to his leadership role. The person who nominated Harry called him a real “unsung hero!” 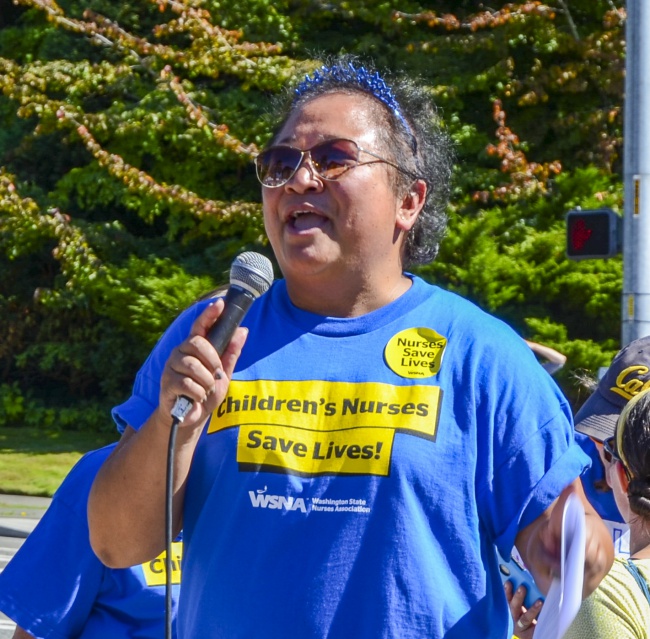 Edna is a longtime member and leader in her local bargaining unit. She tirelessly gives of her time to help other nurses in the facility. Her strong voice and commitment to the nurses at Children’s has been unparalleled.

To know Edna is to know a confident yet humble person. She is never too tired to listen to a nurse’s concerns or to represent them in speaking to management. She is active in chairing or co-chairing numerous hospital committees and has been a vital part of the negotiation team during the last several contract cycles.

Edna is an excellent communicator, fielding calls and email from members, as well as using the Local Unit Facebook page to promote visibility and communication among the nurses at Children’s. Edna’s natural ability to mentor, inspire and “never give up” are unsurpassed.

Joan is not only a grievance officer, she is also a true leader and a team builder who has the strength and dedication to serve as Local Unit Chair while an active grievance officer. Joan knows how to make each member feel that she has his or her back and that she is in the fight alongside them, defending each and every one!

She maintains a positive attitude in the face of negativity, is vigilant in pursuing facts instead of accepting fiction and encourages positive communication in her peers.

Joan is always available to nurses who have a grievance and is known to go to administration whenever she feels there is a problem that needs her advocacy. During her many years in nursing, Joan has worked in many specialty areas and is admired for her compassion, professionalism and competence. Joan is very knowledgeable and is a great resource. She loves helping! 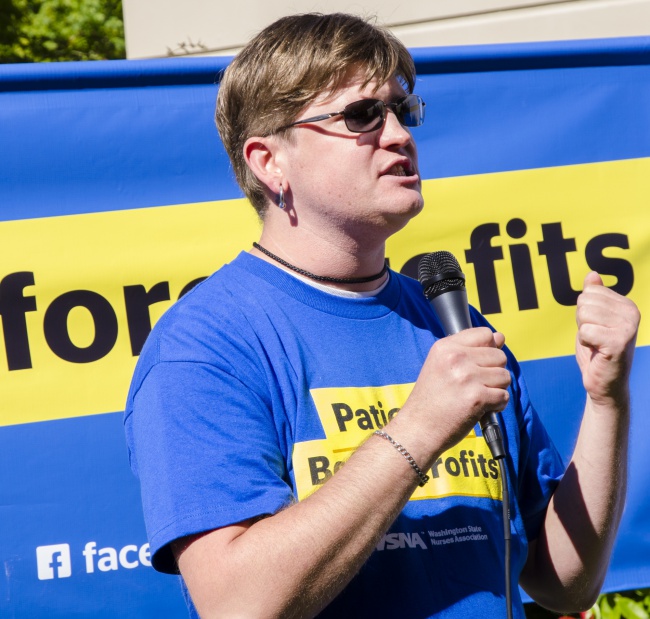 As a bargaining unit leader, CJ is very active in many aspects of his local unit. He attends new hire orientation whenever possible and is constantly recruiting nurses as local unit reps. CJ takes responsibility for many of the WSNA bulletin boards, keeping them neat and up to date. He is noted especially for his ability and initiative in utilizing social media to recruit and engage members. During recent periods of turmoil at Tacoma General, CJ was a steady support for his co-workers, offering kindness, caring and an objective attitude.

CJ is always willing to help in any way he can to strengthen the membership visibility of WSNA, to help nurses understand how WSNA impacts them and to tell nurses how they can get more involved in WSNA. He serves on the Nurse Conference Committee, as well as participating actively on the negotiation team for several contract cycles. 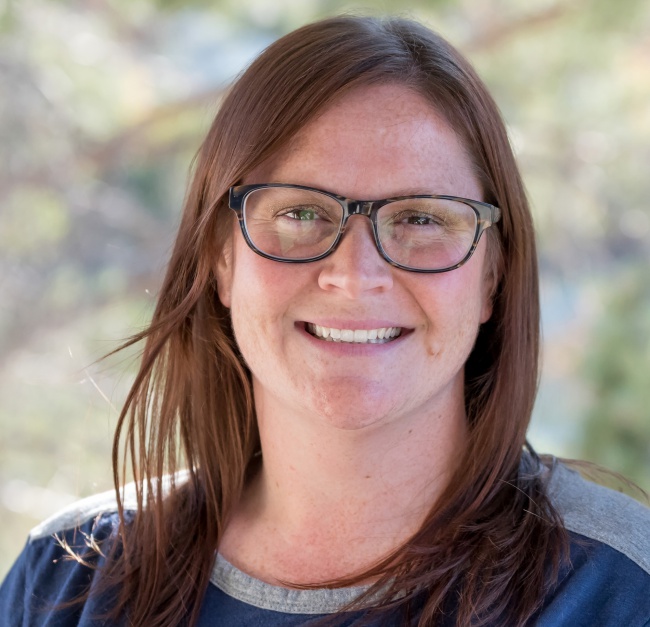 Didi is an exceptional person. She is a leader in her local unit as well as the greater Labor community in southwest Washington, serving on various councils and boards while working and parenting two young children.

Didi has been actively working to build the membership and engagement of nurses in her Local Unit for years. She regularly meets with groups of newly hired nurses as a representative of WSNA to explain the ways that their WSNA membership benefits all.

Didi is known to nurses throughout the hospital as a dedicated WSNA member, willing to help in any way that she can to strengthen and support her unit.

In the past year, Michelle has demonstrated her commitment to her local unit and fellow nurses by supporting colleagues through a difficult grievance time, even though it meant more work for her. She is compassionate toward her peers and their dedication to safe patient care. Michelle stepped forward as a witness in a grievance meeting that might have put her in a very difficult situation with her supervisor.

Michelle is respected by her peers and continues to show excellent leadership, communication and organizational skills.

This team is tough! They stood together through challenging times. They worked long and hard, at their own personal financial sacrifice. There were those in the bargaining unit who were quick to criticize them but did not want to work to make things better.

This team was steadfast, though the very people they were working to represent were giving them verbal abuse in the background. Despite the hardships, they remained calm and professional.

Through it all, this brave and tremendously strong team continued to go to the table to get the best contract possible for all members of the bargaining unit.

As you can imagine, the ED at UWMC is a fast-paced and often chaotic place in which to work. When you add in dealing with construction and the disruptions it causes, along with high acuity and high census, one can understand that it takes a special type of nurse to work there. The stresses of dealing with just one shift in this area are truly exceptional; dealing with it week after week is daunting.

Through all the difficulties this year, this group of nurses has maintained their focus on their reason for being nurses. They always provide the best possible care to each person who presents at their doors, regardless of gender, illness or economic status. All of these ER nurses proudly represent professional nursing to their patients and community.

There is strength and steel in each of these team members. They have faced open hostility from other nurses at their hospital and endured harsh criticism from peers who were not willing to volunteer to help to make things better. With professionalism and determination, they worked together to provide one-on-one coaching to others who had trouble understanding the negotiation process.

This group had to overcome personal biases and conflicts to build a cohesive team and stand firm in the face of adversity. They were able to achieve unity and represent the best interests of the nursing staff, as well as the patients for whom they care, always keeping patient safety in the forefront of their concern. Each team member was so deeply committed to the long haul that they willingly sacrificed time and energy to stick with the protracted negotiations.

The Tacoma General team faced an uphill battle from the first day of negotiations. Negotiating for over a year in adversarial conditions, they stuck together in an exceptional way.

They worked hard to provide timely and accurate communication to their bargaining unit. As WSNA pioneers in successfully using Facebook and social media to engage nurses and the community, they have shown the power of this type of publicity. Through various event—from hiring a food truck, to public rallies, to pickets over the freeway which included an airplane towing a message banner—they were powerful and tireless. Whenever opportunities presented themselves, they spoke passionately about the need for safe nursing staffing and were successful in garnering the next step forward in the push for fixed ratio staffing in this state.

Negotiations were very challenging, yet everyone remained cohesive and determined, never swaying from their resolve to represent each nurse and each department to the best of their ability. This team’s professionalism, approachability and interactive stance are a shining example for us all.

Terry worked at Tacoma General for many years before her recent retirement and has been a loyal and involved member of WSNA. As a respected and vocal leader, Terry led her unit through their recent successful contract negotiations, changing strategies as necessary to bring about the best outcome for the nurses at her facility.

Terry’s contributions over the years have been many and are truly valued by the nurses at Tacoma General, especially those who have followed in her footsteps to become the current leaders and officers. She was so determined to make these negotiations successful that she resigned her seat on the Cabinet to focus her attention on her Local Unit. Terry is described by her nominator as a “true motivator and advocate extraordinaire!”