This week marked the second cutoff of the 2021 legislative session, with bills needing to be voted out of fiscal committees by Feb. 22. On Tuesday, both the House and Senate began long days of floor action. The next cutoff is March 9 when all bills must be voted out of their chamber of origin to stay alive (unless they are deemed “necessary to implement the budget”).

SB 5190 passed the Senate last night with a vote of 34-15. Senator Holy (R – Spokane), who sponsored the bill, highlighted hearing from Spokane nurses in his floor speech. Three amendments were introduced, all of which WSNA opposed – these amendments were voted on and all failed to pass. Senator Keiser (D – Des Moines) and Senator Robinson (D – Everett) both gave strong speeches in support of nurses and health care workers, highlighting how much this bill is needed. This bill now moves to the House. Click on the image below to watch the floor speeches and vote on this bill. The SB 5190 video starts at 1:27. 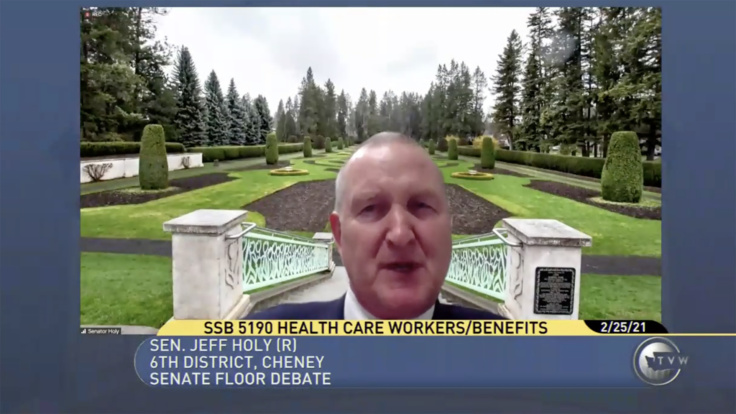 HB 1272 passed out of the House on Thursday evening with 58 votes in favor and 40 opposed. The House adopted a floor amendment that reduced reporting requirements for smaller hospitals. The amendment also included a DOH study that examines the impact of the number, type, education, training and experience of acute care hospital staffing on patient mortality and outcomes. The bill now moves to the Senate.

As public health funding and policy bills continue to move forward, WSNA held on Wednesday evening a second listening session with our members who work in local public health. House Bill 1152 which creates Comprehensive Health Service Districts and reconfigures Local Boards of Health was voted out of Appropriations last week. The sponsors of this bill are continuing to meet with stakeholders to hear feedback, and we look forward to sharing specific feedback provided by WSNA Public Health Nurses. We will be scheduling a third listening session on Thursday, March 11.