The Legislature reached major milestone this week. Thursday was the cutoff for policy bills in their house of origin. This means that no new bills will be introduced this session unless they are necessary to implement the budget. This weekend, the Legislature will hear most of the remaining bills in fiscal committees. Fiscal committee cutoff is Monday, Feb. 7. After that cutoff, focus will move to floor action and voting bills out of their chamber of origin.

As a reminder, all hearings and meetings with legislators are taking place over Zoom and are being aired on TVW. WSNA’s 2022 Legislative Priorities are available online.

This week, the Senate Labor & Tribal Affairs Committee heard the Senate version of our safe staffing bill, SB 5751. Nearly three dozen people, including WSNA members, testified on both sides of the issue and over 4,000 people signed in on the bill. The pro sign ins far exceeded the con sign ins, with 3,386 people signing in support and just 692 people signing in opposed.

Three WSNA members testified in support of the bill: Simon Levene (Longview), Linda Burbank (Tacoma) and Heather Likins (Seattle). As anticipated, the Senate bill did not make it out of committee in time for cutoff. WSNA will now be focusing on moving the House bill, HB 1868, through the process and to the finish line. 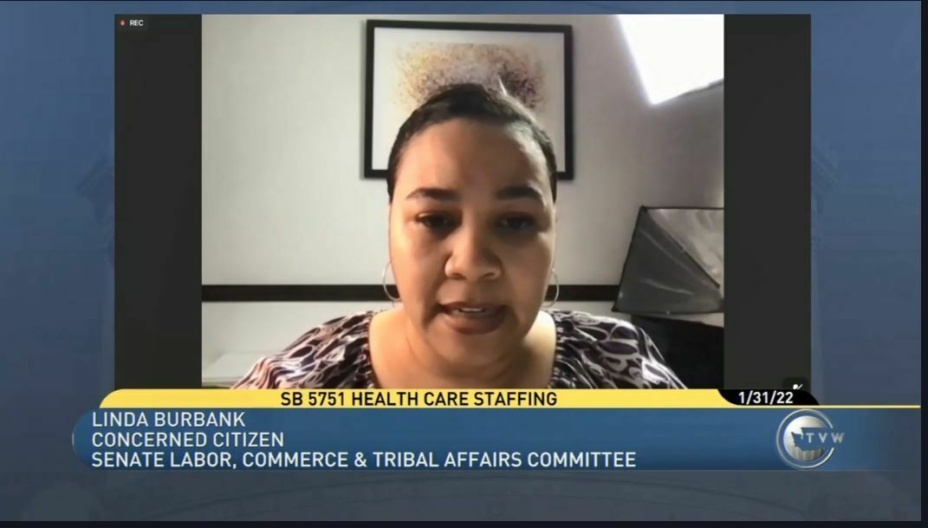 HB 1868 has a hearing in the House Appropriations Committee on Saturday, Feb. 5 at 9 a.m.

TAKE ACTION: Send an email to your Representative and ask them to support safe staffing

On Wednesday, the Senate Labor Commerce & Tribal Affairs Committee took executive action on SB 5911, sponsored by Senator Annette Cleveland (D- Vancouver). The bill was moved out of committee with only one senator voting against the bill. The bill would provide health care workers with hazard pay. During executive session, the committee adopted an amendment proposed by Senator Rebecca Saldaña (D-Seattle). The amendment made changes to the bill to adhere to federal regulations that would allow for the state to use the one-time COVID-19 funding provided by the federal government. Those changes included limiting the payment to those who make less than $100,305 a year and removing contract and volunteer employees from being eligible. The bill is scheduled for a hearing in the Senate Ways & Means Committee on Saturday.

On Monday, the Senate Health & Long Term Care committee took executive action on SB 5704 sponsored by Senator Emily Randall (D-Bremerton). SB 5704 would create payment parity for ARNPs. During the session, the committee adopted a proposed amendment by the sponsor that would require the Washington State Office of the Insurance Commissioner to collect data on the implementation of this act and provide a report to the Legislature in 2024. The bill was moved out of committee with only one senator voting against the bill. The bill has a hearing in the Senate Ways & Means Committee on Saturday Feb. 5.

Two workforce development bills sponsored by Representative Slatter (D-Bellevue) made it past policy cutoff this week. HB 2007, which would establish the Nurse Educator Loan Repayment Program, was referred to the House Rules Committee on Monday and will remain there until it is pulled to the floor. HB 1659 had a hearing on Monday, Jan. 31 in the House Appropriations Committee. The bill aims to make higher education more affordable by creating bridge grants that will help cover costs associated with going to school, beyond books and tuition — things such as tutoring and childcare. WSNA signed in support of the bill. The bill is scheduled for Executive Session on Friday, Feb. 4.

On Tuesday, Feb. 1, WSNA Lobbyist Melissa Johnson testified in favor of HB 1621 before the House Appropriations Committee. HB 1621 requires the Washington State Department of Health (DOH) to establish a stipend program for nurses to be trained to be a SANE and requires DOH to establish a grant program to increase access to certified SANEs. On Friday, the Appropriations Committee voted the bill out of committee unanimously.

On Wednesday, Feb. 2, the House of Representatives approved SHB 1616 on a 63-33 vote, with two members excused. Introduced in 2021, SHB 1616 would increase the income thresholds for patients to receive charity care for the full amount of their care as well as for discounts. The bill now moves to the Senate for consideration.

This week, School Nurse Organization of Washington (SNOW) President Liz Pray testified on bills that would increase allocations for school nurses, social workers and counselors within the prototypical school funding model. Liz started the week on Monday, Jan. 31 by testifying before the Senate Ways & Means Committee on SSB 5595, followed by Tuesday, Feb. 1 testimony to the House Appropriations Committee on SHB 1664.

It appears SHB 1664 will be the vehicle going forward, and the House Appropriations Committee voted it out on Thursday, Feb. 3. As expected, the substitute removed language added in the House Education Committee that would have required each school site to have at least one school nurse and one school counselor. The substitute also phased in the minimum staff allocations for social workers, psychologists and counselors into the model over three years, matching the plan for school nurse increases. HB 1664 now moves to the House Rules Committee. Funding of this bill is also part of budget discussions.