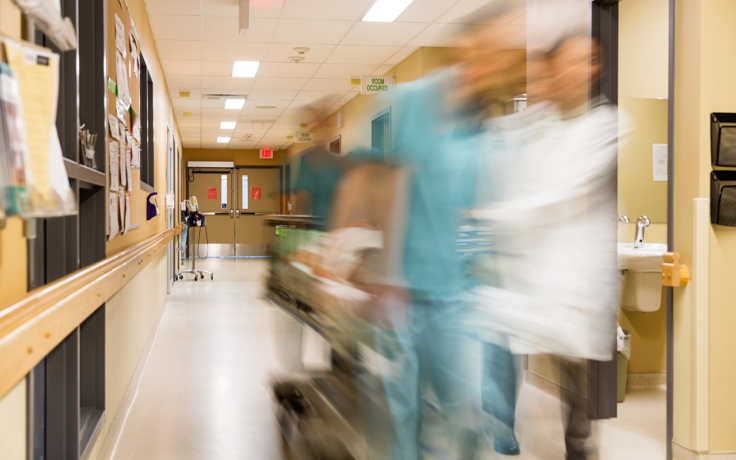 The healthcare staffing crisis is often characterized by the healthcare industry as a supply issue: that there are not enough nurses to staff hospitals at appropriate levels. A review of recent national and Washington State nurse staffing data and survey results indicates that there are enough nurses to safely staff hospitals, but that the quality of jobs is leading many qualified Registered Nurses (RN) to leave their Washington hospital jobs. A new Washington Safe + Healthy report (updated February 10, 2022) summarizes recent data and surveys from consulting firms, academia, healthcare unions, hospitals, and government agencies.

The number of RNs with an active license to practice in Washington State currently exceeds the number of RN jobs by a substantial margin.

The Bureau of Labor Statistics’ (BLS) latest employment count (part-time & full time) of RNs in Washington was 59,300, as of May 2020. The number of active or pending WA-licensed RNs was 120,069, as of November 2021, and expands to 144,001 including Licensed Practical Nurses (LPN) and Advanced Registered Nurse Practitioners (ARNP). On its own, the existence of this gap does not establish that there are over 60,000 RNs (the difference between the two figures) currently seeking to work in Washington. For one, the demand for RNs may have increased since the BLS data was released. Additionally, WA-licensed RNs are not necessarily currently seeking to work in Washington. A 2019 Washington Center for Nursing study found that 69% of RNs with WA licenses were practicing in Washington, with the other 31% either not working in nursing or practicing out-of-state.

The data demonstrates that there is an extensive base of qualified RNs for Washington hospitals to recruit and retain enough nurses to staff hospitals at safe levels.

If 69% of the 120,069 WA-licensed RNs were working in Washington (the 2019 percentage), there would be nearly 83,000 RNs working; 23,700 more than were RN jobs in May 2020. Moreover, the 31% that are licensed in WA but either not working or working in another state represent a qualified talent pool that Washington hospitals could attract with improved working conditions. This talent pool is also expanding. The number of nurses with an active Washington license increased 4.5% annually from 2019 to 2021. Nationally, the number of licensed RNs increased by 6.7% in 2019, and enrollment in nursing programs at a baccalaureate level increased by 5.6% in 2020.

The primary challenge that Washington hospitals are facing is not related to the supply of qualified nurses. Rather, the challenge stems from difficulty retaining nurses.

Nationally, the turnover rate for RNs has increased from 14.6% in 2016 to 18.7% in 2020. Recent studies have identified burnout, insufficient staffing, stressful working environment, and other reasons related to job quality as the reason RNs are leaving or considering leaving their jobs. A McKinsey study showed that ‘inadequate staffing’ was the most important factor in nurses’ decision to leave, and other commonly cited factors such as ‘burnout’ could be dramatically reduced with safe staffing levels.

There is a large talent pool of licensed RNs in Washington—and that number is increasing—but many are leaving to become travelers, moving from one hospital to another, retiring early, or leaving the profession. Safe staffing levels will reduce burnout, attract more people to join–or to return to–the profession, and create a work environment that allows Washington hospitals to retain nurses and provide the level of patient care that Washingtonians deserve.

The full report with more details and citations can be accessed here.

How to prepare for an emergency

Nursing perspective: Life as an OR nurse

Chain of command: What nurses need to know