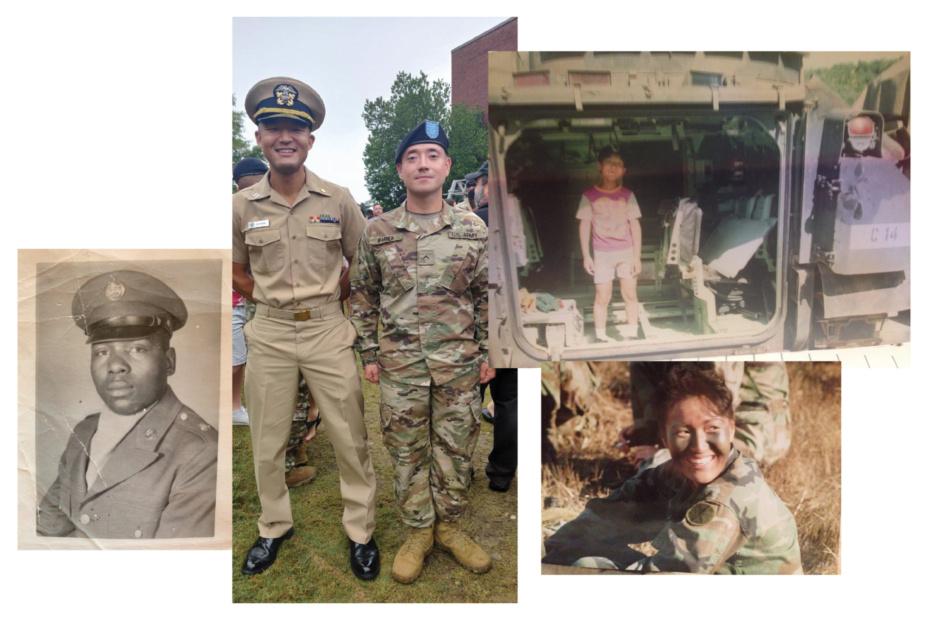 Josh Chatman (center left) comes from a long line of service members, including his father and mother.

Over the past two years, you’ve often heard phrases that refer to nurses as heroes on the front lines in the battle against the coronavirus. Inspired by military terms and imagery, these phrases emphasize nurses’ “fight” against a common, foreign enemy — the COVID-19 virus —while putting themselves in harm’s way to care for patients and save lives. These terms are all too familiar to Lt. Josh Chatman, BSN, RN, who is one of many WSNA members who have served, or are currently serving, in the U.S. Armed Forces. As a member of the U.S. Navy Reserve and an ICU nurse at St. Joseph Medical Center in Tacoma, Josh delivers patient care both at home and abroad.

In November, Josh was recalled to active duty to serve at U.S. Naval Hospital Okinawa in Okinawa, Japan. His mission: provide medical care to the 55,000 active-duty service members and their families living on military bases on the island and throughout the region.

In February, WSNA spoke to Josh (from Okinawa) to learn more about what it’s like to be a nurse on the front lines.

What kinds of missions warrant the Navy to recall reservists to active duty?

When the federal government assesses what personnel is needed for any particular mission, they will pull from reservists if they don’t have enough active-duty service members available. Every job is a little different; for medical reservists like me, we require very little training beforehand because our civilian jobs as nurses translate very well to the active-duty side. A nurse can provide care no matter where they are, which helps the Navy avoid spending a lot of time and resources on training.

Tell me a little bit about Okinawa. What is the history of the U.S. military there?

The island of Okinawa is considered the “Hawaii of Japan.” It's one of the southernmost islands of Japan and also one of the very few islands of Japan that Allied forces invaded during World War II. The U.S. occupied the island as a U.S. territory until 1971, and there are still around 55,000 active-duty service members on the island today.

Have you been stationed anywhere else outside of the United States?

In 2018, I was deployed to Camp Lemonnier in the African country of Djibouti, which is located near the northeastern horn of Africa and across from Yemen. Between Djibouti and Yemen, there is a narrow shipping passage of the Red Sea used to transport goods from all around the world; U.S. military forces, as well as French, German and Spanish forces, are stationed there to provide shipping security in that area.

If any U.S. service members or our Allies contracted an illness while on a ship and needed specialized care, like for appendicitis, or if they were injured in combat in the region, they were flown to our medical center on Camp Lemonnier for care.

Tell me about your current role in Okinawa.

My full-time role is as clinic manager in our OB-GYN clinic, where we have eight doctors, three certified nurse midwives, two RNs, and eight Hospital Corpsmen. I also work rotating shifts in the hospital ICU.

I work in a mostly administrative role at the clinic, so I do a lot of things like overseeing the staff and making sure everyone’s training is up to date. Hospital Corpsmen are enlisted Navy sailors — most of whom are right out of bootcamp and under the age of 25 — so it’s our job to train and orient them to health care basics and patient care. Since I’m an RN, I also provide patient care when needed.

Josh Chatman (second from right) on break with his colleagues.

What services does the clinic provide?

Our clinic provides treatment to pregnant service members and their family members. We’re also the only clinic on the island that provides walk-in contraceptive services. Oftentimes, patients from other military bases on nearby islands and Guam who have complicated pregnancies will be flown here for their deliveries because we have the only maternal fetal medicine specialist in the region.

What inspired you to join the U.S. military?

I’ve known since I was four years old that I wanted to join the military. I come from a long line of service members in my family — both of my parents have served, along with two of my grandfathers. My mother served in the Army for 28 years and retired when I joined the Navy Reserves in February 2014. Right before I was recalled to Okinawa, my brother graduated from Army basic training. So, it’s a family thing.

Tell me about your decision to become a nurse. Was that something you always wanted to do, too?

When I was young, my grandmother was diagnosed with cancer and received treatment at both Seattle Cancer Care Alliance and Madigan Army Medical Center on Joint Base Lewis-McChord. In both facilities, her bedside nurses were amazing. Along with cancer treatments, her care team helped extend her quality of life by at least a year and gave us more time with her. The experience had a very positive impact on me and influenced my decision to also become a nurse.

How long do you plan to stay in the Navy?

I’d like to do 20 years total, either on active duty or the reserve side — so, I’ve got more than 10 years left to go. In the event something happens, like a world conflict, I want to be there to serve our nation.

Whenever my military career ends, I might go back to school for informatics because technology is interesting to me. I’d like to learn more about how we can use technology to increase access to health care and improve the health and wellness of our communities.

Let’s talk more about your civilian job. What has it been like to work at St. Joe’s throughout the coronavirus pandemic?

The first few months of the pandemic were very stressful because my fellow nurses and I didn’t know exactly what we were dealing with. It’s one thing to watch news reports and read data, but it’s something else entirely to be there. It took a toll on all of us, especially being so short-staffed, but I think it sharpened our skills and brought us closer together because we had to depend on each other to keep our patients alive.

How does that experience compare to the stressors of providing care in the Navy Reserve?

The stress of being a civilian nurse in a COVID ICU is way more than any stress I’ve experienced being on active duty so far — even more stressful than when I was stationed in Africa near combat zones. If I hadn’t been recalled to active duty in Okinawa, I would’ve considered taking a break from bedside nursing in some way.

What would you tell nurses to do when they feel stressed or overwhelmed?

Nurses are not very good about self-care; we are almost always putting the needs of our patients and communities first, ahead of ourselves. So, it’s extremely important for all of us to take a step back and check on ourselves to see how we’re really doing. If you decide you need to take a break, that’s okay. If you decide to switch specialties, facilities or career fields, that hospital will still be there regardless of if you choose to stay or go. I think it’s more important to take care of yourself than staying in a place that isn’t healthy for you.

I still get automatic texts from St. Joe’s asking me to come into work because they are short-staffed; remember that it isn’t your responsibility to make sure your hospital is staffed — that’s the hospital’s responsibility. Those things are beyond your control. You have to care for yourself and your family first.

Nurses Month 2022 - You deserve more than "thanks"