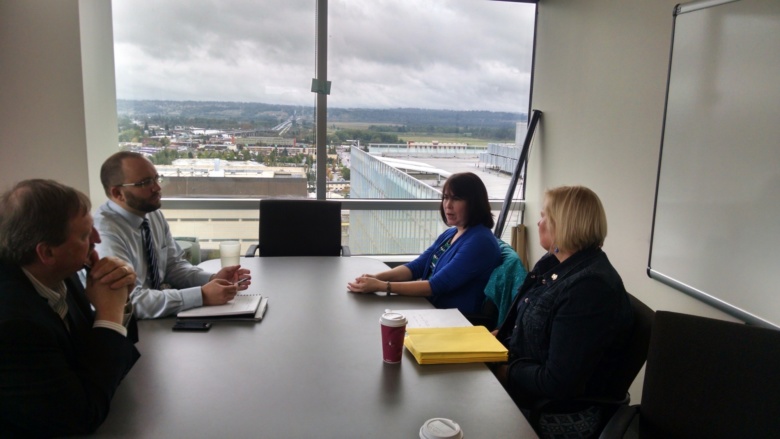 While King County is looking to expand services for pregnant women, young children and teens, the Snohomish Health District shut the doors for the last time on the Immuniza­tion Clinic on June 30. The closure was due to budget cuts and the lack of stable, sustain­able funding for public health. The county’s First Steps program, which provides mater­nity support services, is also slated for elimination.

Closure of the Immuniza­tion Clinic leaves a commu­nity without ready access to immuniza­tions needed for infants and children, pregnant women, refugees and travelers. School-aged children used to be able to walk in and receive their shots. They have now been told they have to go to one of the commu­nity clinics, make an appoint­ment, be seen for a well-child check, and then they can receive their immunizations.

The commu­nity is shocked that something as vital as immuniza­tions is being discarded and that the health district and its health officer, Dr. Gary Goldbaum, didn’t fight harder to retain the clinic. In an edito­rial piece in The Everett Herald, Dr. Goldbaum wrote that ​“The best whooping cough defense is a vaccine.” He continued: ​“August is National Immuniza­tion Aware­ness Month, and in that spirit, I encourage everyone to contact a local health-care provider to make sure you are up to date. Pertussis and many other diseases are largely preventable today because of vaccines. And thanks to the Afford­able Care Act, and increased access at local pharma­cies, getting immunized is easier than ever.” Not so, unfor­tu­nately. Many pharma­cies do not have vaccines on hand, and many have age limits on immuniza­tion admin­is­tra­tion. For example, some pharma­cies will not give immuniza­tions to infants or children under the age of 8. As of August, more than 177 pertussis (whooping cough) cases had been recorded in Snohomish County.

Another program slated for elimi­na­tion is First Steps, a program imple­mented in 1989 to protect vulner­able women and children. The ratio­nale for initi­ating this program was to decrease the number of emergency room deliv­eries for women who had zero prenatal care. This has been a successful program in Snohomish County and statewide. In 2014, between Everett and Lynnwood Clinics, more than 12,000 visits to pregnant women were provided by nurses, nutri­tion­ists and a behav­ioral health specialist.

“I see the client where they are, to address what is their priority that day. For example, how can I talk to them about good nutri­tion if they don’t have enough food in their home?” said Mary Springer, a Snohomish Health District public health nurse since 1989 and regis­tered nurse for more than 40 years. ​“Many are socially isolated. They may not have any family, and it’s impor­tant to have someone validate them and point out their strengths. Some have had multiple adverse child­hood experi­ences, and being a good parent is impor­tant to them.”

The visits with Councilmem­bers were one step in a campaign launched by nurses to educate members on the city and county councils of Snohomish County about the types of issues their clients face every day. Snohomish Health District believes that these women need to be seen in group settings to maximize services, and that First Steps can shut down and be ​“transi­tioned” to private providers. Many of these clients might need to come for two to three visits before they feel comfort­able opening up to their nurse.

Debbie Cartmell-Herzig, Public Health Nurse at Snohomish for 13 years, also attended the meetings with Snohomish County Councilmem­bers. ​“I have women walking in off the street to seek services,” she said. ​“I help them find prenatal care and see them throughout their pregnancy and after the child is born. One teen mom had been told by her doctor to give the baby only 2 ounces of formula every 2 hours. At 6 weeks of age, the baby cried and cried, and she was up every 1 – 2 hours feeding the baby. She kept calling her clinic and they told her she called too much. I was able to teach her about feeding her baby on demand and that it was OK to give the baby as much formula as she needed for satiation.”

The Snohomish Board of Health convened a retreat Sept. 24 to deter­mine the course and future of the Health District. Once the County Execu­tive trans­mits the 2015 budget to the County Council, public health funding may be further slashed. The nurses are planning more meetings to let elected leaders around the county know how harmful these cuts would be.

Your voices were heard, and your activism made a difference