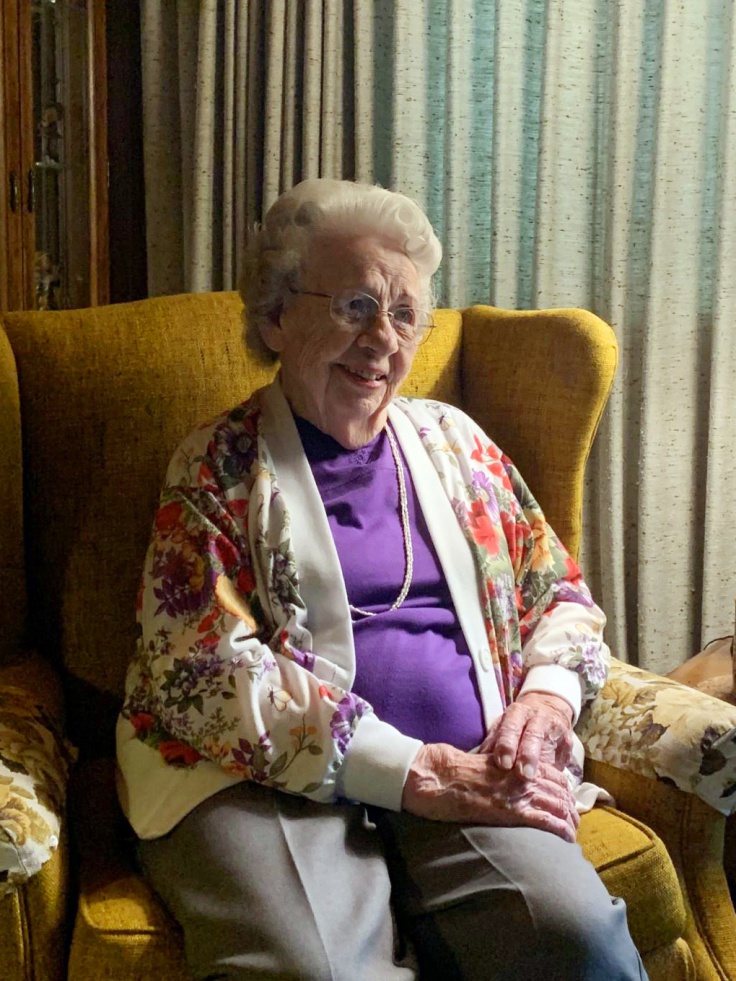 It was June 1944, the country was at war, and Marge Batey was graduating from St. Patrick’s Academy in Sidney, Nebraska. The boys from her high school class were heading into the military, off to the battlefields of World War II. Batey was heading to the Sacred Heart School of Nursing in Spokane.

Batey, now 93, was able to join the ranks of nurses thanks to the U.S. Cadet Nurse Corps, a program created in 1943 to address a critical shortage of nurses. With the high demand for medical personnel to care for soldiers overseas, civilian hospitals were closing wards, and sick people all over the U.S. couldn’t get the care they needed. About 17,000 nursing positions in civilian hospitals were vacant, according to the U.S. Public Health Service.

Batey was one of about 120,000 women — nurses were all women in those days — who received accelerated nursing training during the five years the Cadet Nurse Corps existed. The federal government provided scholarships and financial support for the student nurses in exchange for a pledge to serve the country as nurses for the duration of the war. By 1945, Cadet Nurses were providing 80% of the nursing care in U.S. hospitals.

It was a monumental effort — one that the American Hospital Association later credited with helping to prevent the collapse of civilian nursing care. But veterans of the U.S. Cadet Nurse Corps have never been recognized for their service to the country. The cadet nurses remain the only uniformed corps members from World War II not to be recognized as veterans.

With the youngest of these nurses in their late 80s, there is a sense of urgency. The American Nurses Association has joined 53 other national organizations in calling on Congress to recognize the U.S. Cadet Nurse Corps, stating that, “As the average age of these nurses increases, it is imperative that we recognize these brave women before it is too late.”

Bills to recognize Cadet Nurses have been introduced in the past, but none have passed. This year, the U.S. Cadet Nurse Corps Service Recognition Act was again introduced in Congress and this summer was added as an amendment to the National Defense Authorization Act in the U.S. House of Representatives, with a unanimous vote. The amendment would provide honorary veteran status to former Cadet Nurses, including an honorable discharge, medal privileges and burial benefits for cemeteries administered under the U.S. Department of Veterans Affairs. Excluded are pension, health benefits, or other privileges afforded to former active duty service members, including burial privileges in Arlington National Cemetery.

Nursing groups like the ANA are hopeful that as an amendment to a critical piece of legislation, Cadet Nurses will finally get recognition for their role in the war effort. 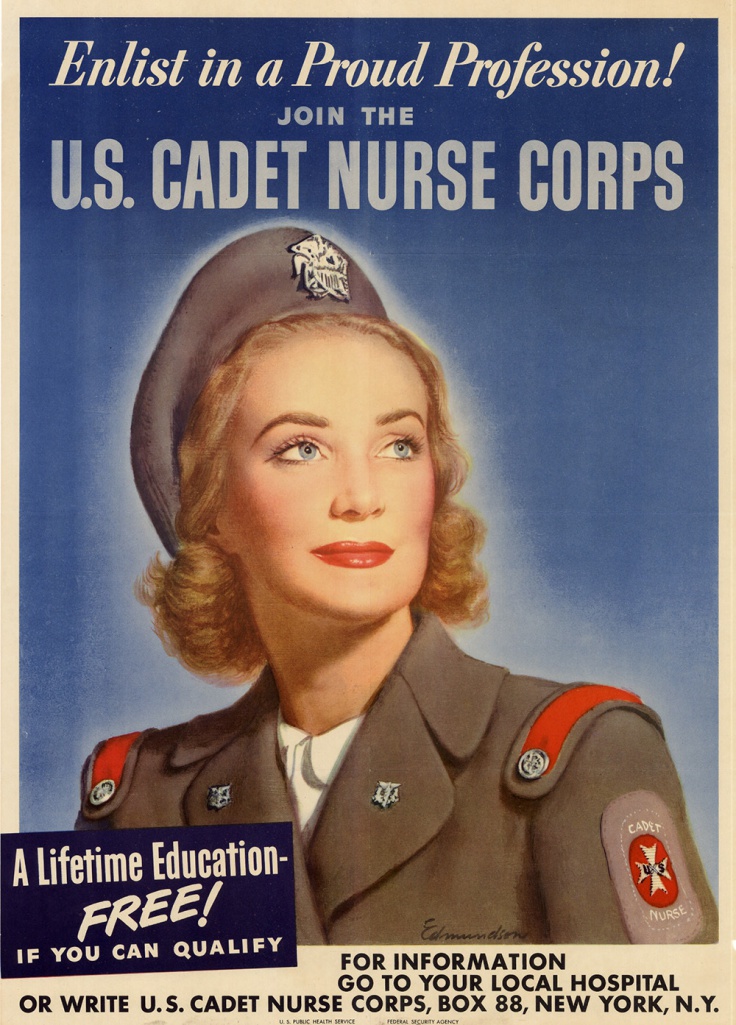 The U.S. Surgeon General during World War II, Thomas Parran Jr., told the U.S. House Committee on Military Affairs in 1945 that “we cannot measure what the loss to the country would have been if civilian nursing service had collapsed, any more than we could measure the cost of failure on the Normandy beachheads.”

President Franklin D. Roosevelt signed the Nurse Training Act, also known as the Bolton Act after Representative Frances P. Bolton of Ohio, in July 1943. Creation of the Cadet Nurse Corps was considered essential not only because the service needed more nurses but also because competition was fierce. With so many men overseas, women were filling better-paying jobs in war industries, which were also short on workers.

“The country’s nursing shortage must be attacked as a production problem. As essential to the war as are planes, guns, and ships, the nurse is a guardian of the national health and the welfare of our fighting men,” wrote Lucile Petry, RN, director of the U.S. Public Health Service’s Division of Nurse Education, in the November 1943 issue of the American Journal of Public Health.

A broad recruitment campaign included posters, newsreels, newspaper and magazine advertising, and radio announcements telling nurses they could get a free professional education “with a future.”

At that time, most of the nursing education in the U.S. was provided by hospital schools. To participate in the Cadet Nurse Corps, the schools had to be accredited and had to conform to minimum standards. Ultimately, 1,125 of the nation’s 1,300 nursing schools signed up to participate. The U.S. Cadet Nurse Corps was also the nation’s first integrated uniformed U.S. service corps, with a non-discrimination clause written in the act that created it.

Batey arrived in Spokane two weeks after her high school graduation, with a sense of patriotism and gratitude for the opportunity the Cadet Nurse Corps gave her; without the financial support, she simply couldn’t afford to go to nursing school.

“We had limited means,” Batey says. “We didn’t have the finances for me to go to school.”

In June 1943, the Sacred Heart School of Nursing had organized a “Step-Up Victory Program” in affiliation with Gonzaga University. St. Luke’s and Deaconess’ schools of nursing had joined the U.S. Cadet Nurse Corps program as well, and by May of the following year, 379 women from the three schools had been inducted into the corps. 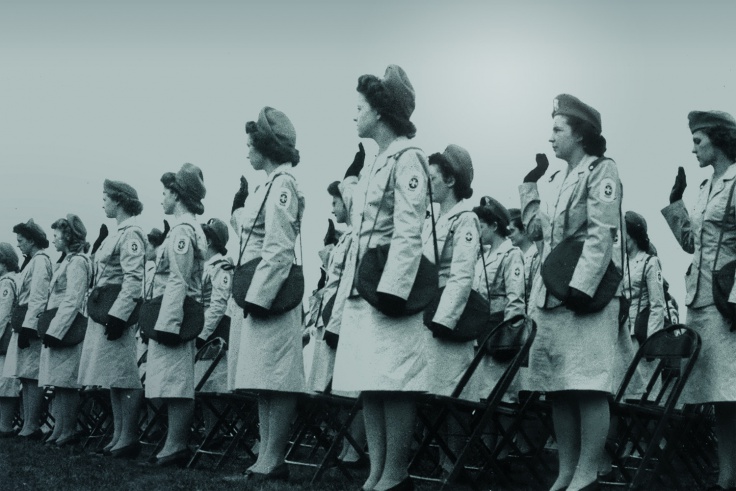 At their induction, Batey and the other nurses raised their right hands and pledged: “I will keep my body strong, my mind alert, and my heart steadfast; I will be kind, tolerant, and understanding. Above all, I will dedicate myself now and forever to the triumph of life over death. As a Cadet Nurse, I pledge to my country my service in essential nursing for the duration of the war.”

Batey eventually moved into the “Nurse’s Home” in an old clinic building on the Sacred Heart campus. The home housed 75 students, with a stern house mother named Mrs. O’Reilly and a swimming pool out back. “You were completely immersed in what you were doing,” Batey says. “You lived there, you worked there, you ate there, you played there.”

The Cadet Nurses received an accelerated course of training — 30 months instead of the customary 36 — to graduate nurses more quickly. Most importantly, the federal government covered the costs of tuition, room and board, a monthly stipend and U.S. Cadet Nurse Corps uniforms — smart, gray numbers with silver buttons, the Cadet Nurse Corps insignia on the sleeve, and a matching beret with the insignia of the Public Health Service.

By September 1945, nearly 85% of the nursing students in the country were Cadet Nurses.

The U.S. Cadet Nurse Corps continued support for nursing students after the war, shutting down in 1948. Ultimately, nearly 120,000 nurses served honorably, providing health care for service members and civilians during World War II. Nursing education changed because of the training standards and courses of study required by the Cadet Nurse Corp. With the ongoing shortage of medical personnel, Cadet Nurses worked at a higher level than before the war and demonstrated that they were well capable of taking on additional responsibilities.

“
We provided a service that was very much essential. ﻿It wasn’t just nice — it was essential.”
— Marge Batey

Batey went on to have a distinguished career in nursing. In her final months of nursing training, she was placed at Eastern State Hospital, and Batey went on to serve as a psychiatric nurse with the Veteran’s Administration, and to get her bachelor’s degree, a master’s in psychiatric nursing and a doctorate in sociology. For the last 37 years of her career, she was a member of the faculty at the University of Washington School of Nursing where, among many other things, she set up the school’s Office for Research Facilitation. She was inducted into the WSNA Hall of Fame in 2004.

“My professional career would not have been possible without the Cadet Nurse Corps,” Batey says. “For me personally, it opened a door.”

Batey had hoped the U.S. Cadet Nurse Corps Service Recognition Act would pass in 2018, the 75th anniversary of the Corps’ creation. She now holds out hope that the Cadet Nurses will this year get the recognition they have long been waiting for.

“It has no money attached to it — all it has, is recognition,” Batey says. “We provided a service that was very much essential. It wasn’t just nice — it was essential.”