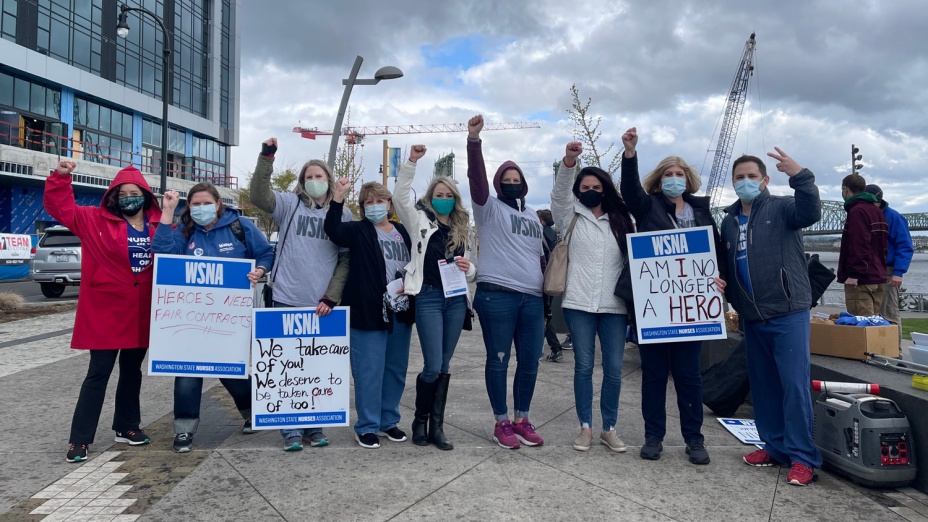 Despite the challenges of virtual negotiations during a pandemic, WSNA members are organizing and mobilizing to win great contract settlements across the state. Congratulations to these local units who have fought for and won new contracts so far this year (as of July 2021). 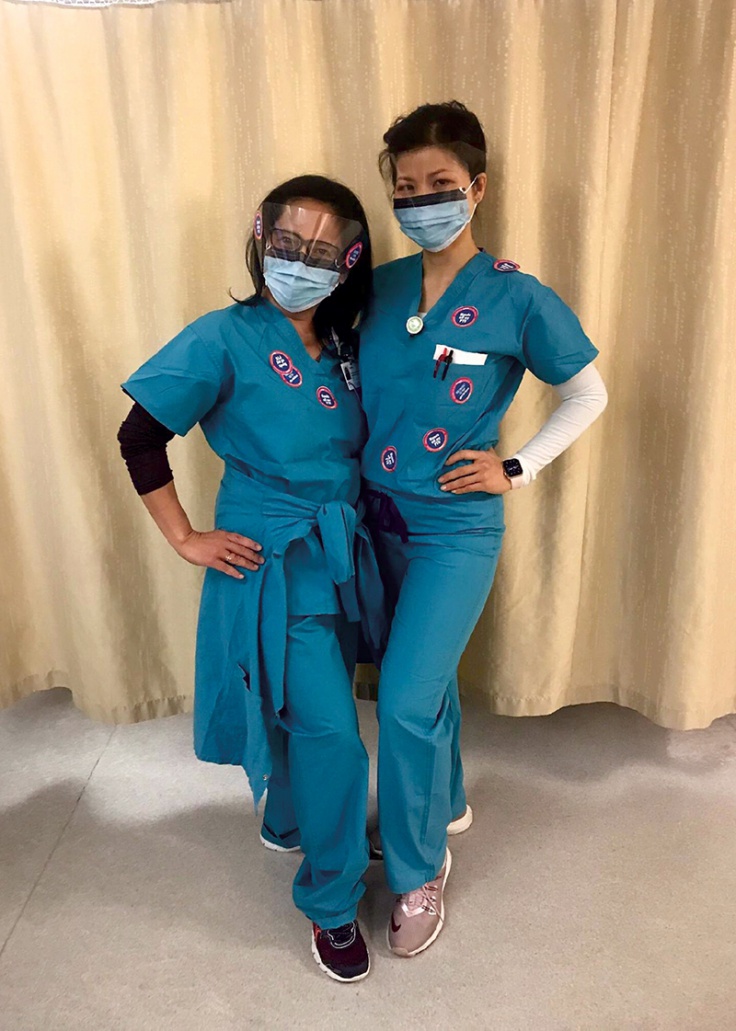 Two Overlake nurses show off their PPE in the Facebook group.

Two Overlake nurses show off their PPE in the Facebook group.

WSNA members at Overlake Medical Center in Bellevue turned to social media to keep WSNA-represented nurses informed of progress at the bargaining table and mobilize them to take action in support of the bargaining team when the pandemic made in-person gatherings difficult.

The contract campaign slogan, “Overlake doesn’t work without RNs,” set the tone for negotiations. The bargaining team recorded video messages to WSNA-represented nurses after every bargaining session and posted them to a closed Facebook group. The video messages, in addition to other communications, allowed RNs to hear directly from their colleagues about the issues being negotiated. When management pushed a PTO proposal that would have stripped PTO accrual by 33% and limited nurses’ abilities to use the PTO they have, bargaining team members again turned to social media and recorded a video call to action during a negotiations caucus and posted it to the Facebook Group. Overlake RNs responded by talking to coworkers about the proposal takeaways and increasing workplace visibility in support of the bargaining team. By the end of the day, management backed off and an agreement was reached. 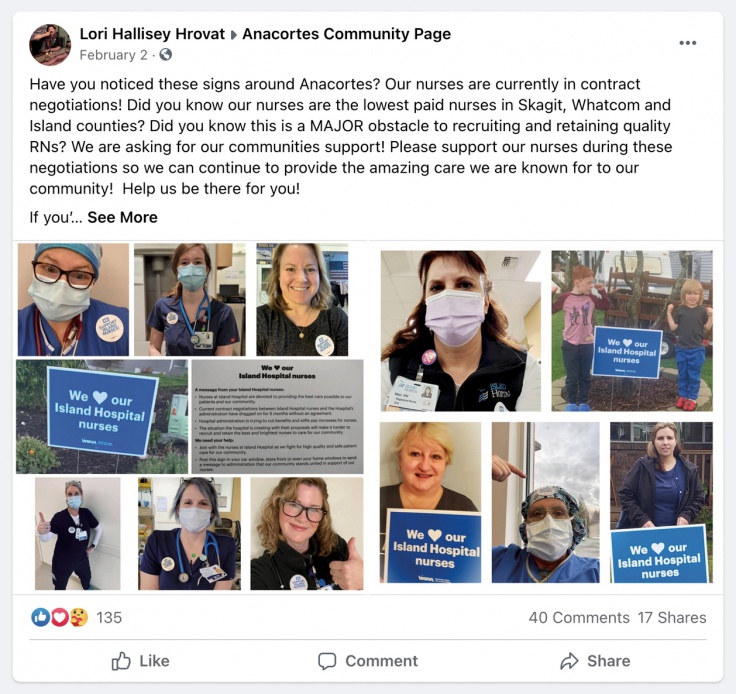 At Island Hospital in Anacortes, WSNA members said, “We will not give in, nor will we give up!” when management proposed increasing the low census cap, increasing per diem requirements and creating standby obligations without associated standby pay.

Local unit officers hosted virtual information sessions and launched a working conditions survey to arm the bargaining team with real-time information from WSNA-represented nurses to present to management at the bargaining table. Nurses stickered up, posted photos on social media with the hashtag #SupportIslandRNs, and distributed and posted car and yard signs to demonstrate solidarity with the bargaining team.

After three months of bargaining and seven negotiation sessions, Island nurses voted overwhelmingly in support of a contract that included a 10.5% wage increase over three years and no increase in low census cap hours. Management also withdrew their proposal to increase per diem work requirements and keep nurses on standby without standby pay. 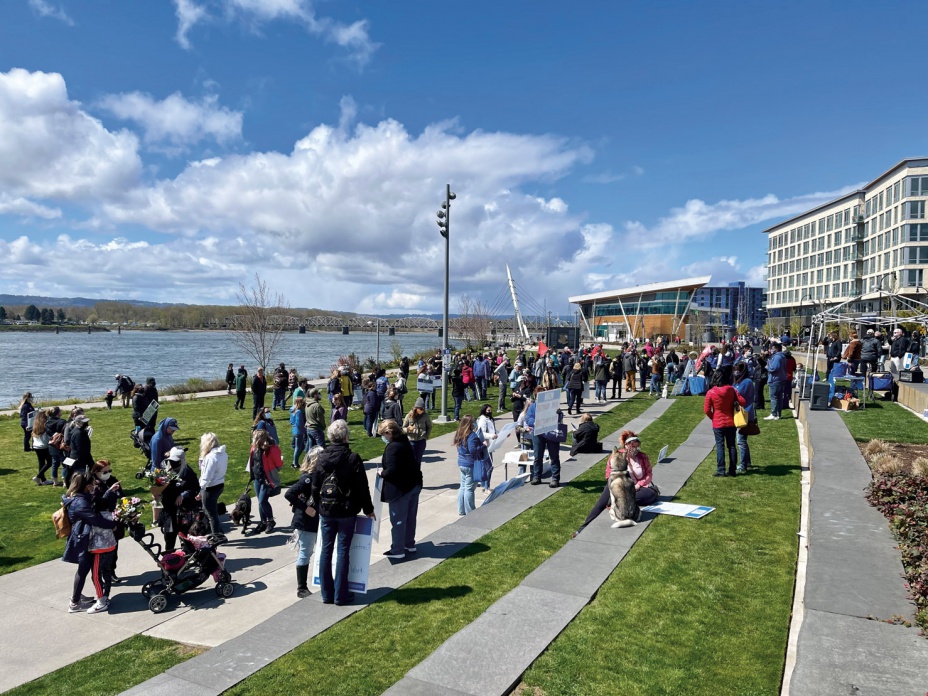 On April 10, 2021, hundreds of nurses from PeaceHealth Southwest Medical Center and their supporters held a rally for safe staffing at Vancouver Waterfront Park.

On April 10, 2021, hundreds of nurses from PeaceHealth Southwest Medical Center and their supporters held a rally for safe staffing at Vancouver Waterfront Park.

Nurses at PeaceHealth Southwest Medical Center in Vancouver went into negotiations saying: “We will fight for a fair and just contract and won’t settle for less.”

The coronavirus pandemic disrupted the order of all things; for nurses at Southwest, that included negotiations for their successor agreement. The WSNA bargaining team met in February 2020 — just weeks before the pandemic hit Washington state. After reaching an agreement on a one-year interim contract, the bargaining team was back at the “virtual” table to bargain a full agreement in January 2021.

The bargaining team was laser-focused on improving staffing by retaining and attracting nurses, and the bargaining proposals from WSNA supported that goal. After eight bargaining sessions, management still insisted on 1.5% increases for each year of the three-year contract. They provided no response to WSNA’s proposals to increase floating premium, charge pay, night shift differential or premiums for certification and advanced degree pay. Management also proposed eliminating seniority rights when bidding for vacations.

The proposals from management disrespected nurses who had literally put their lives on the line during the pandemic, and WSNA members responded by mobilizing in support of the bargaining team.

Bargaining team members and WSNA staff rounded the facility, talking to nurses one-on-one during every shift about management’s proposals and the need to increase pressure on the employer. Nurses signed a petition committing to attend a rally for a fair contract and helped circulate the petition for others to sign.

On April 10, hundreds of nurses and allies from other unions and the community attended the rally for a fair contract. Local Unit Co-Chair Didi Gray, RN, summed up what the struggle was about: “We are fighting for our patients and our community. Safe nurse staffing allows us to provide the highest-quality care to our friends, neighbors and community members every time they are in the hospital.”

The rally, increased nurse activity in the hospital, and community support of the bargaining team paid off. On April 26, in a last effort to secure a settlement before bringing in a federal mediator, a tentative agreement was reached.

“Hands off our PTO/EIB!” For three Providence facilities in the Spokane area, paid time off was a bargaining priority.

St. Luke’s Rehabilitation Medical Center and VNA Home Health aimed to preserve contract language on traditional PTO and extended illness banks (EIB), while Holy Family Hospital focused on traditional vacation and sick leave. The emergence of these key issues was not surprising; after all, the threat of eliminating traditional vacation and sick leave, as well as traditional PTO/EIB, and replacing it with PTO and a short-term disability plan was the issue that brought Sacred Heart Medical Center nurses and other Providence-represented workers across the state to the brink of a strike in early 2020. 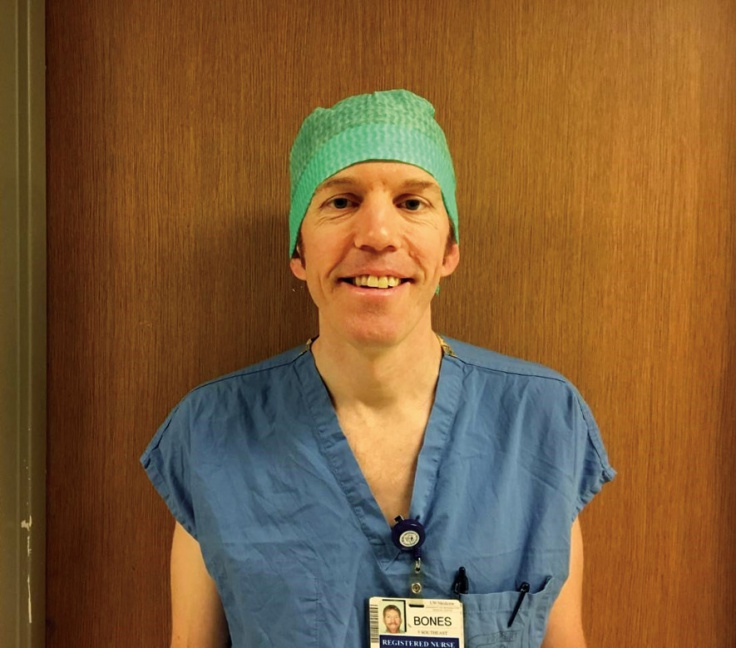 Nurses at UWMC — Montlake identified wages and closing the wage gap between UWMC and other Seattle hospitals as top priorities for 2021-2023 negotiations. Going into bargaining, two other unions representing workers at the facility had already settled contracts that included no increases for the same two-year period.

WSNA’s bargaining team completed extensive research on the wage gap with other competing hospitals in the area to make their case at the bargaining table. WSNA-represented nurses mobilized in support of the bargaining team by sharing their economic hardship stories, attending local unit meetings, joining a new Facebook Group, showing support by wearing WSNA buttons and badge buddies — and, most importantly, by keeping their coworkers informed and engaged.

Solidarity among RNs demonstrated to management that they were bargaining with all nurses at UWMC — Montlake, not just the eight members on the bargaining team. That mobilization moved the employer off their original offer of no pay increases over two years to 8% over two years.

We are WSNA. Local Unit Co-Chair Chris Jakubowski said, “All nurses at UW Montlake make up WSNA Montlake — and as part of WSNA, we are part of over 19,000 nurses in Washington. These numbers give us our power.”