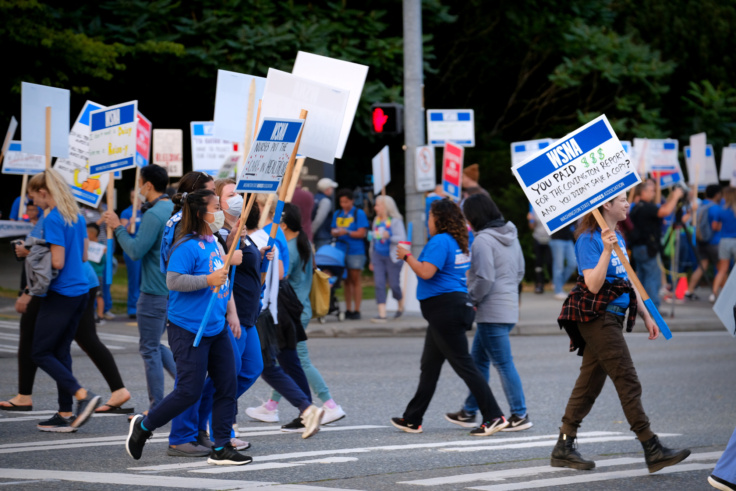 More than 900 nurses at Seattle Children’s took part in an informational picket outside the hospital Aug. 9 demanding changes to their contract. More photos.

More than 900 nurses at Seattle Children’s took part in an informational picket outside the hospital Aug. 9 demanding changes to their contract. More photos.

Under the contract, all 1,700 nurses represented by the Washington State Nurses Association will get $10/an hour raises over the next 12 months.

The hourly increase is unprecedented at Children’s.

By the end of the three-year contract, a nurse on the beginning step of the wage scale will see their pay increase by 49.7.%.

“The best way to retain newer nurses and grow the next generation is to raise the floor,” said Pamela Chandran, labor counsel for the Washington State Nurses Association. “We were able to make the wage scale more equitable for nurses at the lower end of the scale while ensuring that senior nurses received increases we’ve never seen before at Children’s.”

The agreement converts wage progression to an equitable annual advancement.

Previously, nurses were advanced to the next step on the wage scale based on hours worked rather than years of experience. As a result, nurses who worked part time were far below what they would have gotten at another hospital.

Over the contract, nurses who are below where they should be on the wage scales based on their years as a registered nurse will be raised to the appropriate step.

The agreement was reached after five months of talks that left nurses feeling devalued. More than 900 nurses at Seattle Children’s took part in an informational picket outside the hospital Aug. 9 demanding changes to their contract.

“This is the first time I’ve felt a sense of relief in months,” said Edna Cortez, a registered nurse at Seattle Children’s for 32 years, and co-chair of the union.

The union also garnered other financial increases to premium pay and differentials.

Meanwhile, nurses at Astria Toppenish, a 63-bed community hospital serving members of the Yakama Nation and surrounding rural communities, signed a contract making them among the highest paid in Eastern Washington.

Behind the scenes at Seattle Children's bargaining