Families throughout the Pacific Northwest rely on Seattle Children’s to keep their children healthy and safe. Seattle Children’s ranks among the top 50 children’s hospitals in the country, and among the Top 3 in the Pacific region (Alaska, California, Hawaii, Oregon and Washington), according to U.S. News & World Report. The nurses and other hospital staff that have committed their lives to taking care of the region’s children are paramount in fulfilling this mission.

Like many hospitals with a staffing crisis, Seattle Children’s has responded by increasing its reliance on travel RNs—nurses who work on short term contracts away from home at significantly higher wage rates. The hospital also offers newly hired nurses hiring bonuses ($10,000-$20,000) while providing nothing to retain experienced nurses.

Given the cost of finding new nurses and paying travel nurse wages, retaining nurses through meaningful wage increases makes more financial sense. An investment in the permanent staff nurses—local residents who have made long-term commitments to the region’s children—is both an ethical and financially prudent decision.

Here’s a look why:

Seattle Children’s Hospital spent $52 million on travel nurses over the past two and-a-quarter years; $30 million in the last two quarters alone, according to information released by the hospital.

While the rate for travel nurses varies, UW Medicine cited the average rate to be about $174 an hour (including agency fees), according to a fiscal note released Feb. 25, 2022, for HB 1868. The average wage for permanent nurses at Seattle Children’s is less one-third of what a travel nurse costs the hospital.

To put the cost of travel nurses in perspective, if Seattle Children’s gave every permanent nurse a 44% raise, it would still not match the projected annual expense for travel nurses ($59 million).

Invest in the community

Nurses across the country have been retiring early or leaving the profession due to burnout after two years of providing care during a pandemic, and many others are choosing to exercise their market power and find jobs at higher-paying hospitals.

At Lucille Packard Children’s Hospital at Stanford University, for example, entry -level nurses make $78 an hour, more than twice as much as the $36 an hour they earn at Seattle Children’s. Seattle Children’s nurses also have the option to take their own lucrative travel assignments both in local hospitals and out of state where they can make upwards of $150 per hour. 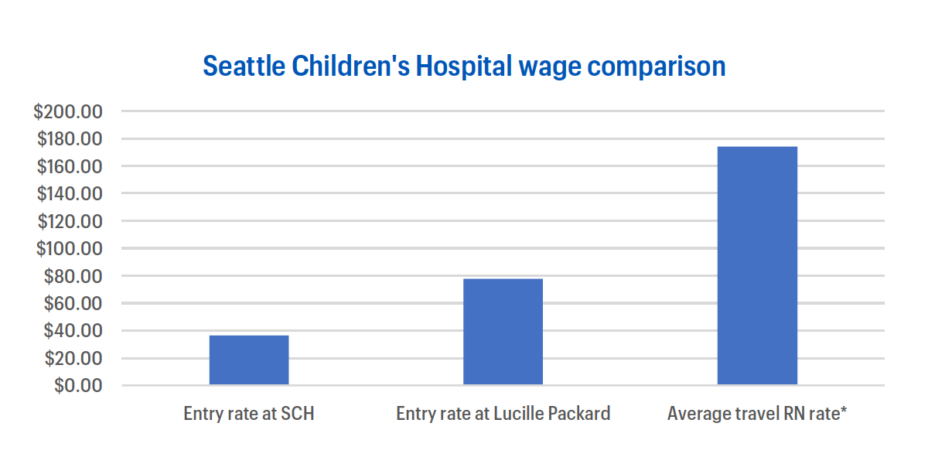 *From University of Washington Fiscal Note regarding HB 1868. Rate includes agency fees, which do not go to nurses.

*From University of Washington Fiscal Note regarding HB 1868. Rate includes agency fees, which do not go to nurses.